Chocolate Coconut Pecan Pie is a “truth” in my house. And, the truth is: My family doesn’t care what else is on the table at Christmas or Thanksgiving, as long as this pie is there.

Note: I originally published this recipe a few years ago, but have updated it with some new ingredients, new photos and process shots, as well as updating the text of the post a bit. I’ve also included photos of the 9″ as well as the 10″ tart.

This pie. THIS pie. It really is EVERYTHING a pie should be. I’ve been making it since 2001, when I saw a version of it in the November issue of Bon Appetit. (I realize that for some of you, that’s most of your life!) It’s been on my Thanksgiving and sometimes Christmas table ever since. Of course I’ve made several changes. But, every holiday, my son swears this is the dessert he wants for his Birthday! Let me just repeat: It’s THAT GOOD!

The barely sweet cocoa crust holds an ooey-gooey caramelly-flavored pecan pie infused with puddles of bittersweet chocolate, bits of coconut, and roasty, salty pecans. And here’s the deal. Strangely, I don’t really care for regular Pecan pie, but this pie? Yes yes yes – any day, any time. Those who know me well would say it’s the ample amount of bittersweet chocolate embedded in the syrupy, gooey caramelly filling that does the trick for me. (They know me so well.) But it’s also the toned down sweetness from traditional Pecan Pie, and a nice salty note from the roasted pecans. And, you? …. Is there even a question whether YOU need to make this?

So, if you’re looking for a festive dessert for the holiday season that everyone will LOVE, this pie is for you! Enjoy!

If this pie isn’t your jam, maybe try :

Pumpkin Bundt Cake with Penuche Frosting – so good with that salty caramel frosting! Or, take a peek at this

Sticky Toffee Pudding or these awesome

This post may contain affiliate links. As an Amazon Affiliate, I may earn a small commission, at absolutely no cost to you, for purchases you may make of items linked from this site.

This pie recipe is pretty straightforward, and is truly easier than it looks. The original recipe is delicious to be sure. But, with corn syrup and sweetened coconut, I wanted to bring the chocolate and pecan flavors more forward. I’ve made this in both a 9″ and 10″ Springform and Tart pan. Both are good, but I like the filling-to-crust ratio best in the 10″ pan. Also, I have tried many substitutes for the corn syrup in attempt to cut the sweetness a bit more, eliminate overly processed ingredients, or to add a different flavor note.

I used to make it with real maple syrup (not “pancake syrup”) instead of corn syrup, for a less processed and less sweet filling. Maple Syrup was tasty, but it all but disappeared into the pie, without the thickness of a thicker corn or Golden Syrup. The last couple times making it, however, I’ve used Lyle’s Golden Syrup, which, as opposed to being made from corn (Corn Syrup), it’s made from Granulated Sugar. This is the ticket for sure! Golden Syrup, while still sweeter than sugar, is not as sweet as Corn syrup. It tastes a little toasty, a little buttery, a little caramel-y. So it provides this depth of flavor you won’t get anywhere else! All good things in my book! And, my new favorite variation on this favorite pie!

Also, I use unsweetened, shredded coconut, again, cutting the super-sweetness of the filling. And, just to add some salty to the sweet, because that’s who I am, my nut of choice here is roasted, salted pecans. (I purchase pre-salted, roasted pecans from Trader Joe’s.) I also use bittersweet chocolate chips or pieces instead of semi-sweet.

The crust is a chocolate version of a traditional pie crust. The dough is somewhat drier than a regular pie pastry due to the addition of the cocoa powder. So you’ll mix together the dry ingredients, cut in the butter and then add the 3 egg yolks. I use either my fingers or a pastry cutter to incorporate the butter. You just want to make sure there are many small pieces of cold butter and they are well distributed throughout the dry ingredients. Then, stir in the egg yolks. At this point, if you squeeze a handful of the dough, it should hold together. When using smaller-sized eggs, you may need an extra yolk. Then press it into a 9″- or 10”-springform pan. If it is just too dry and doesn’t press an inch up the side of the pan, add a tablespoon or two of ice water, and it should press well. But, I’ve only had to do this once in all the years I’ve been making this.

Pop it into a 375F oven and bake for 15 minutes. After par-baking, reduce the oven heat to 350F, and let the pie crust cool a bit while you mix the filling ingredients together in a bowl and pour into the crust. This just takes a few minutes.

If using Golden Syrup: You’ll want to begin by whisking together the melted butter and brown sugar. Add the eggs, one at a time, and whisk until incorporated. Add in the Golden syrup, followed by the vanilla extract and salt. Stir in chocolate chips, coconut and pecans. Pour into the par-baked crust. When you pour the filling into the crust, you may feel the need to distribute the pecans a bit if they are all on one side of the pie, but don’t worry too much, they move around a bit to fill the space during baking. Then bake until it’s nice and golden brown, and only a bit of jiggle in the filling. In a 10-inch pan this takes 38-42 mins, or 50-55 mins in a 9-inch.

If using Maple Syrup: When you substitute maple syrup for the thicker corn syrup, you may need something to thicken it up so it still produces some body for the pie. A few years ago, I first added some molasses. I’m not sure whether it thickened it, but it did make for a less runny pie and added some richness (as if with this list of ingredients one would need more richness😉). The past couple years, I also added a tablespoon of flour to the filling, following the lead of Sally’s Baking Addiction in her pecan pie and my pie was easier to cut! It still doesn’t hold together quite as well as the corn syrup version, but it isn’t so sweet your teeth hurt.

Once it’s out of the oven, sprinkle the remaining chocolate pieces over the pie in a circle (or whatever shape you like). Once they are melty and shiny,  spread it until smooth, and sprinkle with a few tablespoons of coconut. I like to toast those flakes in the oven for about 4-5 minutes (watch carefully!) after removing the tart. Or you can use sweetened coconut on the top, but I just use the same unsweetened coconut I used in the filling.

So, bake this Chocolate Coconut Pecan pie! It may become a staple on your holiday table! 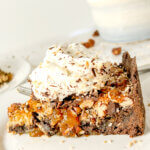 Originally from Bon Appétit, this pie is a holiday tradition in my house. I make it every year at either Thanksgiving or Christmas, or maybe both. It’s THAT GOOD!

Equipment needed: ideally, a 10” Tart or Springform pan. I’ve also baked it in a 9” springform as well using a slightly longer baking time. The 9″ tart is nicely deeper, a bit more ooey-gooey (in a good way!), but takes 10-15 mins longer to bake, so you may need to tent with foil partway through the bake. I think the filling-to-crust ratio is better in the 10″ pan.