If you’ve never had Detroit Style Pizza, now is the time! But, if you have, here’s the recipe to satisfy that craving you likely have on the daily!

Let me just start out by clearly stating, “I’m not taking sides here! There’s room for everyone.” (All you Chicagoans and New Yorkers: Don’t forget I’ve made that statement!) And, what I mean by this is that I love all types of pizzas: Italian, New York, Chicago, California, and now the lesser-known, but nonetheless awesomely delicious Detroit Pizza.  They are all wonderful! But seriously – where has Detroit Style Pizza been all my life?

Detroit Pizza been getting so much press lately, I couldn’t help but notice. Esquire Magazine  published an article, as did Eater.com,  Even Forbes Magazine  featured it this past May.  Pizza has so many regional variations, we all could use a good Pizza dictionary so we have it all straight. Maybe clip it out and carry it in your wallet so you’ll be in the know about all of the pizzas!

Now, I grew up just a couple of hours drive from Detroit, but only recently tried this (somewhat) deep dish wonder. CRUNCHY cheese all around the edge. I mean, that alone makes me want to try it. What’s not to love there? Completely buttery and crispy edged, Focaccia-like crust, chewy in the middle. Yes, please! Nearly charred pepperoni and a crazy-thick layer of cheese? Of course! Thick, slightly sweet tomato-y sauce? OMG! A veritable party of flavors and textures!

And, after making this Detroit Style Pizza, I realized our local Pizzeria growing up did make a very similar pizza. They called it “Sicilian” style. And, as it turns out, Detroit Style Pizza is a descendant of the pizza you get in Sicily.

To make my own Detroit Pizza, I used a variation of this recipe  from Serious Eats. Making just a couple of adaptations, I then followed the lead of Epicurious, adding shredded Parmeggiano Reggiano along the sides to amp up the crunchy caramelized cheesy edge a bit.

The second change I made was with the cheese. Traditional Detroit Style Pizza uses Brick Cheese, named after the material used to press the moisture out of it. After searching several of my city’s groceries and cheese purveyors, I was unable to find any Brick cheese. Turns out, I should’ve just gone to Amazon, where I could’ve chosen from several fine Wisconsin Brick Cheeses. The cheesemonger at my grocery and I discussed substitutes, and decided on using Fontina or Monterrey Jack instead of the preferred Brick. So, in the end, I’ve tried both along with half low-moisture whole milk Mozzarella.

Traditionally, Detroit Style Pizza is baked in a heavy 14×10 Steel pan. If you feel you need one, you can get it here, at Amazon. I used my trusty 13×9, but am considering getting one of these Anodized Steel pans just for Detroit pizza. Yes, it’s that good! Tasty enough to deserve its own vessel in my kitchen!

So, have YOU tried Detroit Style Pizza yet? You definitely should! And, after you make this pizza, please let me know what you think!

If you’re looking for Italian recipes, be sure to check out this Lamb Ragu with Peppers from Lidia Bastianich, or this awesome Skillet Chicken with Pancetta, Olives and Caramelized Lemon

And for dessert, how about these Whole Wheat Fudge Brownies, or this gorgeous Key Lime Tart with Fluffy Meringue?

There’s not a lot of active time in this pizza, most of the time is waiting for the dough to rise. Once the dough has risen, you’ll spread it into the pan. Since it’s unlikely that it will easily reach the edges, just spread it as far as you can, then cover and let the glutens relax a bit. Use this time to make the sauce. But if you’re short on energy, or time, go ahead and use a pre-made pizza sauce. It just needs to be a thick sauce, not a pasta-type tomato sauce.

After the dough is spread, add a layer of pepperoni and sprinkle the parmesan around the edges. Then add the cubes of cheese and another layer of pepperoni. Finally 3 stripes of sauce and pop it into the hottest oven you can muster. The first time I made this pizza, I set the oven to 475F. It turned out pretty good, but the cheese didn’t brown as I would’ve liked and it took 19 minutes. The second time, I set it to 525F, and the crust crisped perfectly, a bit blackish and nice and crispy around the edges, and the cheese began browning in 16 minutes. Since all ovens are different, just watch your pizza, checking every couple of minutes once you get beyond 12 minutes. 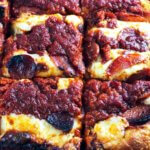 Adapted from a recipe on Serious Eats, from J. Kenji Lopez-Alt, this is definitely serious pizza! Thick, focaccia-like crust, lots of cheese and pepperoni, and thick, flavorful sauce! I daresay, one of the best pizzas you’ve had!

This recipe is not finicky or difficult; however, it does involve some waiting time, when letting the dough rest, rise, then rest again, but you will be rewarded with amazing flavor!

Make and Bake the Pizza: