A classic Bakewell Tart, with Almond Frangipane filling and tart cherry jam, all over a tender shortbread-style crust! You won’t believe how awesome this traditional English treat, adapted from THE Mary Berry, tastes!

Strangely, or maybe not so much, my children seem to have always wanted to be British.  From an early age, each of them has inexplicably developed a perfect British accent. My youngest, at the age of 5, (with all of the charm he could muster) even successfully convinced a waitress that we had recently adopted him from London.   She looked at us – “Wow!  Really?”  So, how did this happen? Do all kids do this? I’ve no idea. No one we know is British. We don’t (generally) stream “Downton Abbey” nonstop. It’s not like I’d been in the habit of making this fantastic Cherry Bakewell Tart.  Because if I had, we would have all wanted to be British.

Years ago, when I was visiting London for the first time, I loved the cosmopolitan feel of the city, as well as its rich history, regal castles, the fantastic architecture, the museums, and don't even get me started on Harrod's. But the food? Meh. I thought it was kind of...bland. Could it have been that I was backpacking through several cities, on the $50 a day plan, the one that was supposed to include room and board? Maybe.

Could it be I was so much younger and didn't know where to find the culinary delights of London? Again, maybe. Clearly, I didn't know where to find a Bakewell Tart.  (Ok, dating myself here, but this is not what most of us used the internet for in those days.) I hadn't even heard of Mary Berry. Thank goodness now we have The Great British Baking Show (TGBBS) which stars Mary Berry, esteemed British Baker and author of 70+ cookbooks, to at least enlighten us on the baked goodness of Great Britain. One fine example is this traditional Cherry Bakewell Tart Recipe, adapted from a Mary Berry recipe. Trust me, you will wonder where this package of deliciosity (is that a word?) has been all of your life!

Since I've been watching TGBBS, I've tried Bakewell tart - a spectacular dessert that I can (not so eloquently) describe as a dense, almost custard-y almond cake in a buttery shortbread crust, slathered with delicious jam. This particular recipe called for raspberry jam, but I am partial to tart cherry jam, particularly when pairing with almond flavoring. So so crave-able! But you truly could use any flavor jam, from strawberry to apricot to fig jam and it would be amazing!

Once I made this tart, I knew what my faux-British children were looking for - A simple but scrumptious Cherry Bakewell Tart Recipe! Enjoy!

Interested in other British Desserts? Take a look at these:

Discolsure: As an Amazon Affiliate, at no cost to you, Hummingbird Thyme receives a small commission for purchases made from links I provide. These help with cost of this website, but do not change the price you pay for the goods. 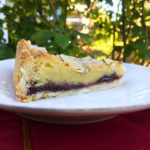 The jam I used was This one.

The original recipe was written with weights of ingredients, in grams, rather than Imperial measurements.  I calculated measurements from the weighted ingredients I used. So I recommend using the weights, as noted, if you have a scale. Special equipment needed:  a 9″ Tart pan or 9″ Springform pan, either with removeable bottom. It is worth mentioning that, like many baked goods, the flavor of this tart improves over time.  If you can make it a day in advance, I highly recommend it.  I like to keep the tart in the refrigerator because it makes the slices much easier and prettier.

I use about 2 lb. dried beans as pie weights.  I keep them in a Zippered plastic bag in my pantry, marked Pie Beans, reusing the same ones over and over again.