Completely Outrageous Apple Cinnamon Rolls with Salted Maple Glaze! A perfect Autumn breakfast or brunch, and awesome for the Holidays!

I’ve never been one to leave “well enough” alone. I heard it repeatedly as a child, like when I felt the need to “smooth things over” after a disagreement with my sister right at the point when feelings were at their peak of hurt. Naturally, these incidents would often incite another argument.  Mom: “Can’t you JUST leave well enough alone?” Apparently, I couldn’t. I didn’t fully realize that we all have our own idea of what is best, that my position wasn’t the only and obvious correct one.

But, as usual, Mom was right. I couldn’t leave well enough alone. I was the kid who always needed to do just one better, get one more cookie, have a grade better than the others, win the contest. In the words of the incomparable Freddie Mercury, “I want it all, and I want it NOW!” And then sulk when it didn’t happen my way. And, it wasn’t because I was competitive with others so much as I knew there was better I could do. At least that’s what I tell myself.

But here’s the thing: No one knew. (Well, TBH, they probably did, I just like to think they didn’t) I was the shy kid, the one who rarely even spoke in public. It was all an internal struggle.

That’s kind of what happened with these Apple Cinnamon Rolls with Salted Maple Glaze. Some time back I posted these glorious Cinnamon Rolls with Cream Cheese Frosting. And they are definitely awesome. A tribute to my Mom’s crazy-good freezer full of Cinnamon Rolls. A lovely soft roll, filled with gooey cinnamon filling and topped with smooth, but not-too-sweet fluffy cream cheese frosting. But, this year, I really felt the need to one-up those rolls. I wanted to add some apple flavor, and change up the frosting to a glaze, so the flavors of the apple would shine. And true to my inner child, my internal struggle took awhile to solve this conundrum.

So, I came up with this glaze. This Salted Maple Glaze. So good, you might be tempted to drink it. And I’m not kidding. There will likely be a little extra, you know….

Inspired and adapted from the glaze on Sally’s Baking Addiction, I punched up the maple flavor a bit, adding some extra maple syrup and some salt and then I used buttermilk to mix it all together. Also I love the Buttermilk-based Apple-Cinnamon rolls from the brilliant Jennifer at Foodess so I adapted that to the dough used in my Cinnamon rolls.

I’m so glad I didn’t leave well enough alone! But really, can anyone leave “well enough” alone, when there is more just around the corner? And with a little salted maple glaze? And you will be glad, too, once you try these outrageous Apple Cinnamon Rolls with Salted Maple Glaze!

These Apple Cinnamon Rolls are easy as any other to make. Don’t be afraid of yeast-bread baking. Just think of the yeast as another ingredient. One that is “active”, so at the beginning it needs to prove it’s still ready to go.

The trickiest part of this recipe is rolling up the filled dough into a tight cylinder. With those apples inserted, it’s a bit more difficult than with a flat, soft cinnamon filling. You can see mine are not as tight as one might like, but the flavor doesn’t care! They’re still phenomenal!

When cutting the rolls, it’s easier to get 16 even-thickness rolls than it is to get 15, which is how many most recipes make. So just go with how you feel, 15 or 16. All good.

The important things are to be sure your yeast is active, the dough gets kneaded and every roll gets a nice gooey filling. 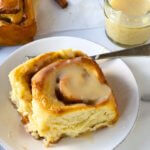 These Apple Cinnamon Rolls are the BOMB! And when topped with the salty maple glaze, you may as well jut put 2 on your plate to begin with.

I adapted the glaze from Sally’s Baking Addiction, and followed Foodess’ lead on the buttermilk rolls.

If you don’t have a stand mixer, it’s ok to use a hand mixer or mix by hand. You’ll just need to allow 10-15 minutes to hand-knead the dough until it is smooth and elastic.