Have you ever heard of marinating after cooking? If you’re a flavor-seeker, like me, this super easy Soy Sauce Marinated Grilled Flank Steak will convince you that you’ve been missing out!

Several years ago, I worked for this guy. Let’s call him Genghis. He was a pretty good guy, and, actually a reasonable boss. But he was a typical “Type-A” personality. You know, the one who says “to be successful in this job, you need to possess the following list of abilities: smart, creative, have a world view, and a ‘sense of urgency’. Ok, fine. Those things make sense.  Seemingly I met most of those qualifications. But this ‘sense of urgency’ was the quality he failed to see in me. His reasoning was that a sense of urgency is demonstrated by physical things – loud voice, pounding the table to make a point, criticizing of those who did not share this urgency.

My argument to him was that one (me) can have urgency without yelling and pounding. That’s not who I am. I’m generally a pretty calm person. I argued there is more than one way to get where you’re needing to go urgently. Diplomacy, for instance. Finding common ground and sharing commons goals. These things didn’t fly with him. So I was on his bad list for a minute. And then, Genghis, like most bosses, moved on at some point to another job.

But, and here’s my point – I do have a sense of urgency! I often have an urgent need to cook something delicious, relatively healthy, and not have it take up too much of my time. So there! And, I do hate it when I find a recipe I like, and it says ‘Marinate 8-10 hours or overnight’ when I don’t have any hours, really. I don’t like shorting the flavor by shortening marination time too much either.

Well, no more skimping on the marinating time! This Soy Sauce Marinated Grilled Flank Steak gets marinated after it’s cooked! What? Thanks to this recipe, adapted from Bon Appetit, we can marinate after cooking! There is some inactive time, but this is time you can use to make the marinade, toss a salad, etc. But this Grilled Flank Steak! All the flavor, and a bit of sauce to boot! If only Genghis had understood there’s more than one way to demonstrate “urgency”. At least his steaks would’ve been better.

So, get your marinade on! Pour it on after you cook your steak! So much flavor! And, a time-saver to boot!

If you love steak, be sure to check out this magnificent New York Strip Oscar Syle or this tasty Coffee-Rubbed Strip Steak  .  Two of my older, but most popular posts! And perfect for (outdoor or indoor) grilling season! 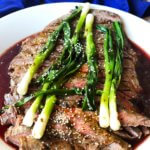 From the July 2019 Bon Apetit, as seen on Epicurious, this steak is marinated after grilling! This provides MORE FLAVOR! Isn’t that what it’s all about? So easy, too! There’s some inactive time pre-grilling and some post-grilling, too, but all in the name of flavorful, tender steak!