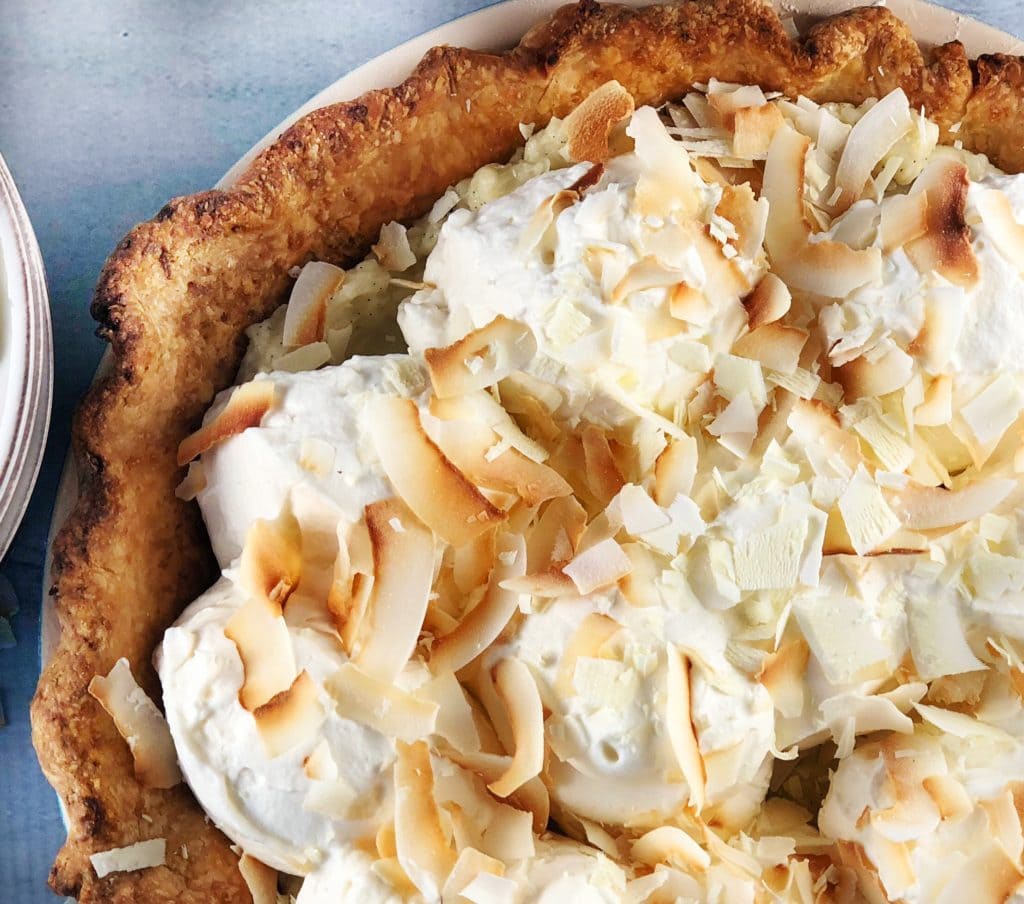 It’s Birthday Season in my house!  Of the 5 of us, 4 of our birthdays fall between April 3 and June 3.  That usually means 4 birthday dinners (or parties ?!), 4 days of celebration, 4 sets of thank you notes, and 4 Over-the-Top Birthday Cakes! Wow! … You’d think, right?  But sometimes, just sometimes, I wish for the birthday where someone says, “How about a Birthday Pie?”  This year, it happened.  And my baby girl wanted not just any old pie, but one of my all-time favorites, Tom Douglas’s Triple Coconut Cream Pie. A crispy, coconutty shell encases the best coconut pastry cream you’ve ever had. All of that yumminess is (over-the)-topped with a mountain of whipped cream, and covered with toasted coconut chips and shavings of White chocolate.  If your mouth isn’t watering now, check your pulse. WOW! 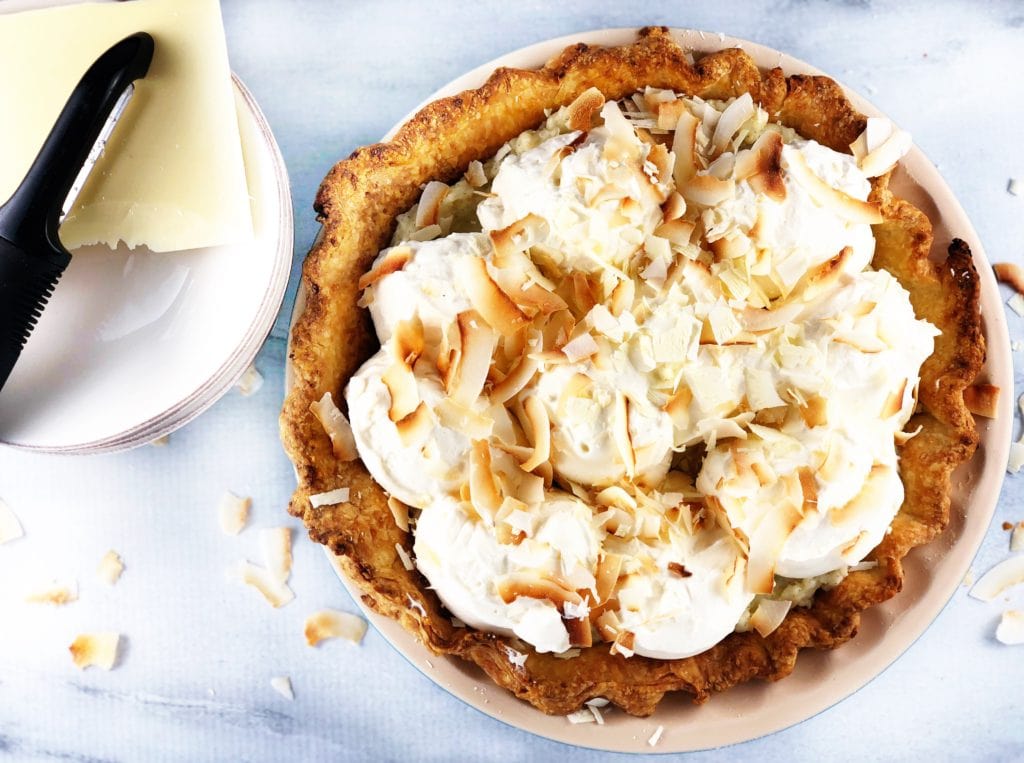 Tom Douglas is nothing less than a celebrity here in the Pacific Northwest.  His restaurants are among the best in town, each offering Tom’s spin on classic comfort foods, local favorites, pizza, even plant-based cuisine. All amazing!  His original restaurant, The Dahlia Lounge, made famous by a scene in “Sleepless in Seattle” was the first to offer this Triple Coconut Cream Pie, and several others now follow suit. I, personally, can’t leave any of his restaurants without a slice.  It’s a masterpiece. 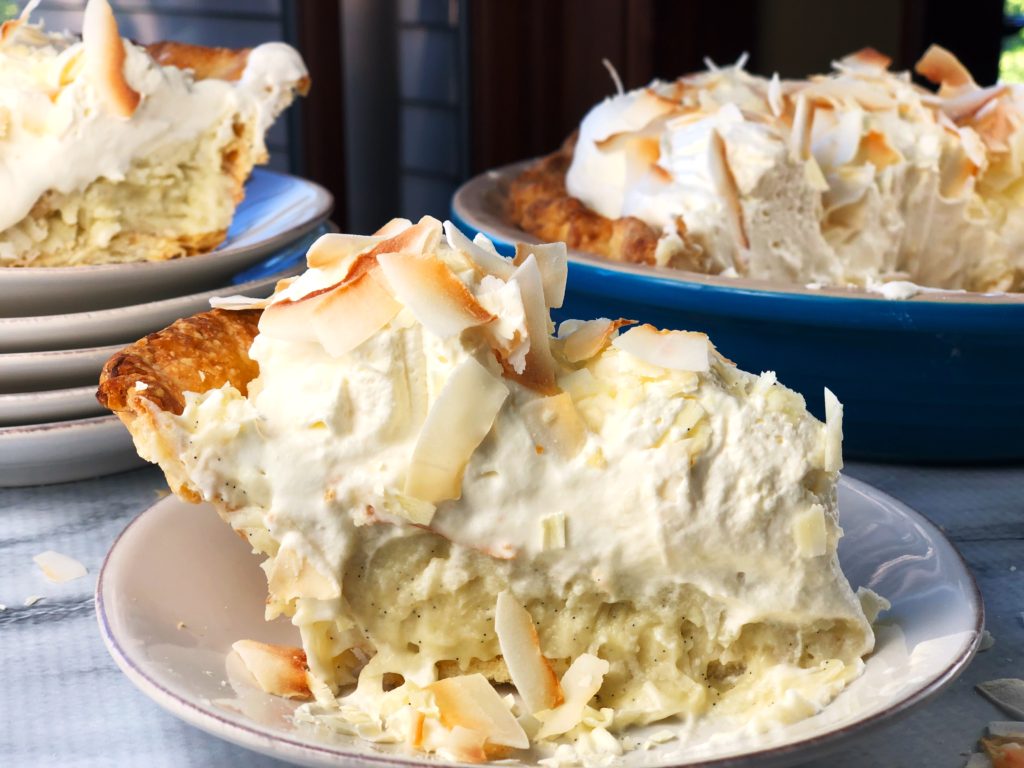 When my daughter was younger, she loved cooking and participated in various cooking camps and classes during the summer months.  I met Tom at a cooking store where he was promoting his cookbook Tom Douglas’ Seattle Kitchen, which contains the recipe for this completely over-the-top Coconut Cream Pie. I bought the book and asked him to autograph it for my daughter (ok, I admit an ulterior motive:  I wanted this recipe).  I made the pie a couple of times from the recipe in the cookbook, but noticed over the years a few adaptations have been made, by Tom and others, each producing slightly better results, in my opinion, at least. Instead of 2 cups of milk, it seems pretty standard now to use half coconut milk and half milk, but it’s fine to use 2 c regular milk if you wish.

And, Deb Perelman, of Smitten Kitchen, made a couple of adaptations I copied here.  She reduced the sugar in the whipped topping. She also has a genius way to avoid using pie weights for baking the shell, which I include in this adapted recipe.  This is an important change, since the shell is, as she describes, “pesky”.

I received a question about where to purchase coconut chips. I got them at my local grocery or Trader Joe’s. But if you can’t find them they sell Coconut Chips at Amazon. If you click the link you could at least see what to look for at your grocery. 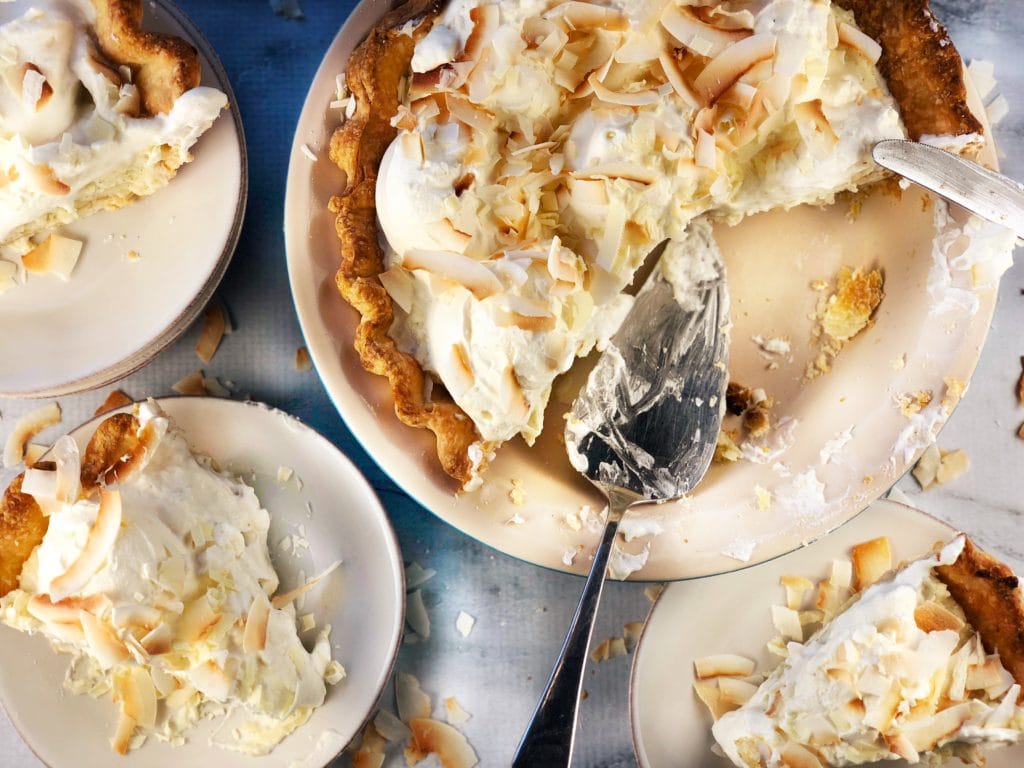 So, next time there is a birthday in your house, maybe give this festive pie a try.  You might start a new tradition. Or maybe for a regular Sunday night.  Once you try it, this pie is bound to become one of your all-time favorites! Enjoy! 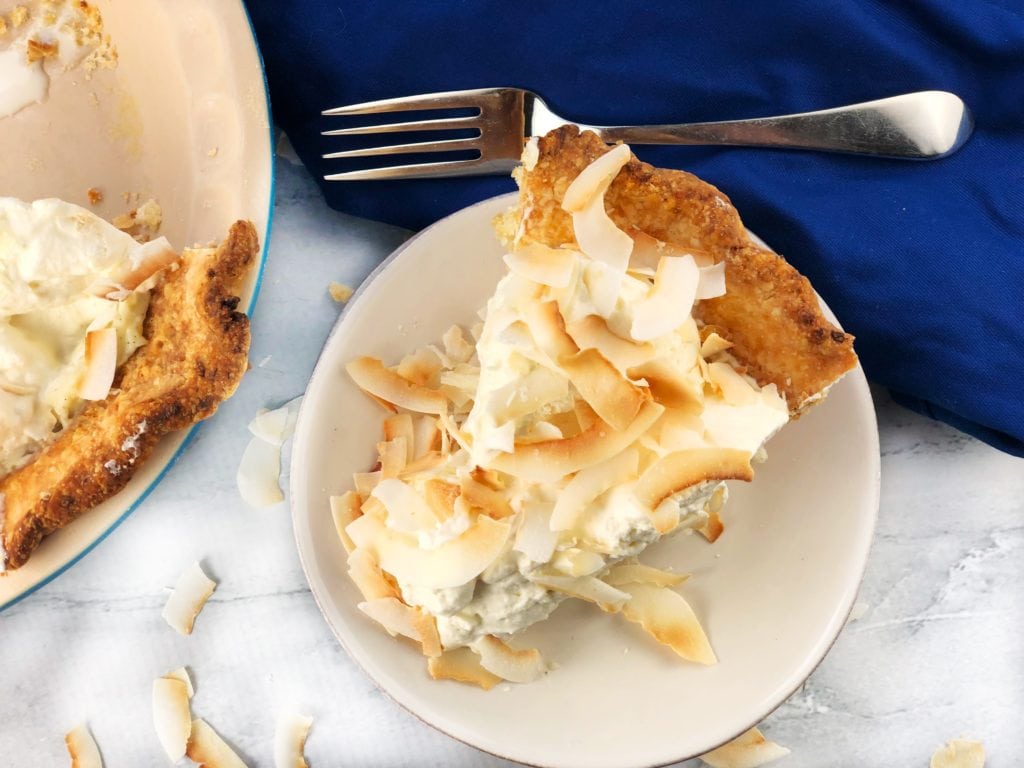 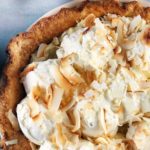 Truly, the BEST Coconut Cream Pie you’ve ever had!  I adapted this pie only slightly from Tom Douglas’ Seattle Kitchen. I used a change suggested by Deb Perelman’s Smitten Kitchen, and reduced the sugar in the whipped cream from 1/3 c to 2T.  If you like yours sweeter, feel free to add more than the 2 T.  I did; however, follow her recommendation to use a vanilla bean.  I know how expensive a full vanilla bean is, but if you ever have a special occasion for which you want to make this pie, it really does make a difference to use the bean.  Otherwise, I’d use a full tablespoon of natural vanilla extract.   I also added a couple pinches of salt, because that’s just who I am.

This pie does take awhile to prepare. So be sure to read through the instructions before starting.  You can do it in pieces – make the shell the night before, for instance.  It does take some chilling time after it’s assembled, so plan for that.  All in all, it takes about 2 hours to make. Then an hour or so of chilling time.  So plan accordingly.

For the Coconut Pie Shell

For the Coconut Pastry Cream (Filling)