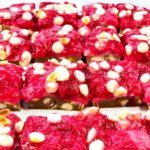 This recipe was inspired by, and adapted from several recipes, including Smitten Kitchen’s Blondies, and Hummingbird High’s Rhubarb and White Chocolate Blondies.  I changed bits of both of these recipes to create my Blondies.  I have to say, though, Smitten’s Blondies are a revelation – the browned butter makes them positively divine!  They are called “infinitely adaptable” for good reason!

This recipe produces an 8×8 pan, but you could double it and make it in a 9×13.  You may or may not need to double the rhubarb jam if you make it in the larger pan (see note 1), as I made a pretty thick layer of rhubarb, due to my intense love for the stuff.

For the Rhubarb Jam: