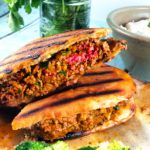 This sandwich, with its crispy, thin pita (or naan), is so juicy, spicy and warm, you will absolutely love it!  The yogurt-tahini sauce is a fresh complement to the richness of the meat and spice, so be sure to include it with your sandwiches!

After seeing this recipe on America’s Test Kitchen, I knew I had to make it!  I found it on The Splendid Table and quickly got to work.  I noticed several of the comments on the site mentioned the pitas burning a little too much, and since I knew I was making this “grilled” dish indoors, I tried a couple of different ways to “grill” them.

I made half the sandwiches on a grill pan on my stovetop, and the other half on a heated sheet pan in a 375F oven.  Both turned out well, but the grillpan definitely had a crispier texture on the outside.  Those cooked on the sheetpan were still crispy, but came out a little greasier. I think due to the fatty nature of the meat, a grill or a grillpan is necessary to catch the fat that the meat exudes during cooking. I might suggest putting the grillpan in the oven, preheating it, oil it slightly, and cook the sandwiches there if you are reluctant to do it stovetop.

You can use pitas or naan.  Pitas, because of their pocket, will be easier to slice horizontally. The naan I found were thicker than the pitas , and you’ll want about 1/4” thickness or a bit more, ideally.  Grill the less fragile side (the one with the char marks in a “dotted line” pattern) first!

To cook in the Oven: