German Apple Cake with the best Caramel Sauce you’ve ever had! This is the cake of the season! This one is old-school, just like Grandma made (or should’ve made)!

Apparently, Apple Season comes before Pumpkin Season (who knew?) – and I’ve practically missed the whole thing, because, if you haven’t noticed, the internet is in a full-on Pumpkin Frenzy.  I guess I should’ve known.  The pumpkins on all of my neighbors’ porches are a dead giveaway. But better late than never. Especially with this cake. It is A-MAZ-ING! There was a day when I would’ve given the idea of Apple Cake a big “Ho-Hum.”  For evidence of this, just look at my parade of Cake Recipes – several pages of spectacular cake recipes and so far, only one lonely apple-containing cake.

But now I know better. THIS cake is the one I’ve been missing. This German Apple Cake goes by many names – among them “Jewish Apple Cake” or “Apple Dapple Cake”.  Just Google those, you’ll see a recipe for this cake, often this very recipe. I even found a very similar recipe in my trusty Betty Crocker Cookbook, as well as a book of my own Grandma’s recipes, that was lovingly compiled by my Godmother and cousin.  Grandma’s recipe is called German Apple Cake, so that’s what I called this one, although I liked the way the apples and cake were layered in Smitten Kitchen’s Deb Perelman’s Jewish Apple Cake.  I topped it with a simple-to-make caramel sauce, for a little caramel apple flavor.

I’m not kidding when I say this is one of my favorite cakes. The flavors are so simple and so satisfying. Filled with sweet-tart and cinnamon-y chunks of baked apple, all embedded in super-moist vanilla cake. The drizzle of caramel over the top is a perfect complement to the cake.  But the best thing, and the thing to remember – like many baked goods, the second day, the cake is EVEN BETTER! I don’t know why, maybe the apple juices just settle into the cake, but it takes on a new texture, sort of bread-pudding-like. So my advice would be to make this cake a day before you want to serve it. I know you’ll be adding this recipe to your Apple Season favorites!

So if you’re like me and missed Apple Recipe Season altogether, have no worries!  This cake more than makes up for being late to the Apple Season party! 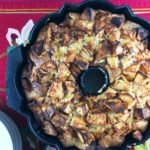 This is the new Autumn cake, even though this recipe isn’t new at all – seems like every family has a version of this cake.  This one is from several sources including Deb Perelman’s Smitten Kitchen, but if you Google “German Apple Cake” or “Jewish Apple Cake” or even “Apple Dapple Cake”, you can see the same ingredients listed. It is so, so good – a moist cake filled with cinnamon apple flavor – there’s a reason this recipe has been around so long.  Better the second day, I promise!  So make it in advance.  Top the cake with whipped cream, ice cream and/or the caramel sauce I used, adapted slightly from Sally’s Baking Addiction.

For the Caramel Sauce