What’s in a name? Turns out, some might think it’s actually less than meets the eye. A few months back, I was stunned to see results of a Research study where people could identify the names of strangers by looking at their faces! Upon seeing photos of faces, participants correctly guessed a person’s name from a list at a rate (significantly) better than chance would assume. Is that crazy? Strangely, and contrary to what some might wish, the theory here is that people subconsciously adapt their look to the cultural norms that their name might dictate. For instance, in American culture, we often expect a person named “Bob” to have a rounder face than someone named “Tim”.  (Isn’t that true?) Or a “Jenny” might have longer hair than a “Pat”.  Do you find that disappointing?  Pretty sure I do. This chicken, conversely, will not disappoint.  And, unlike the “Name the Face” study, you likely can’t tell just by looking how awesome this chicken is.  I’ll admit, it is not that attractive; maybe it’s downright ugly, with that kind of curdled looking sauce.  By looking at it, you also have no idea that this dish is called Chicken in Milk.  Not even the flavor gives away that ingredient.  But the flavor does honestly say that Roast Chicken in Milk should be renamed “The Most Awesome Roast Chicken You’ve Ever Had!” 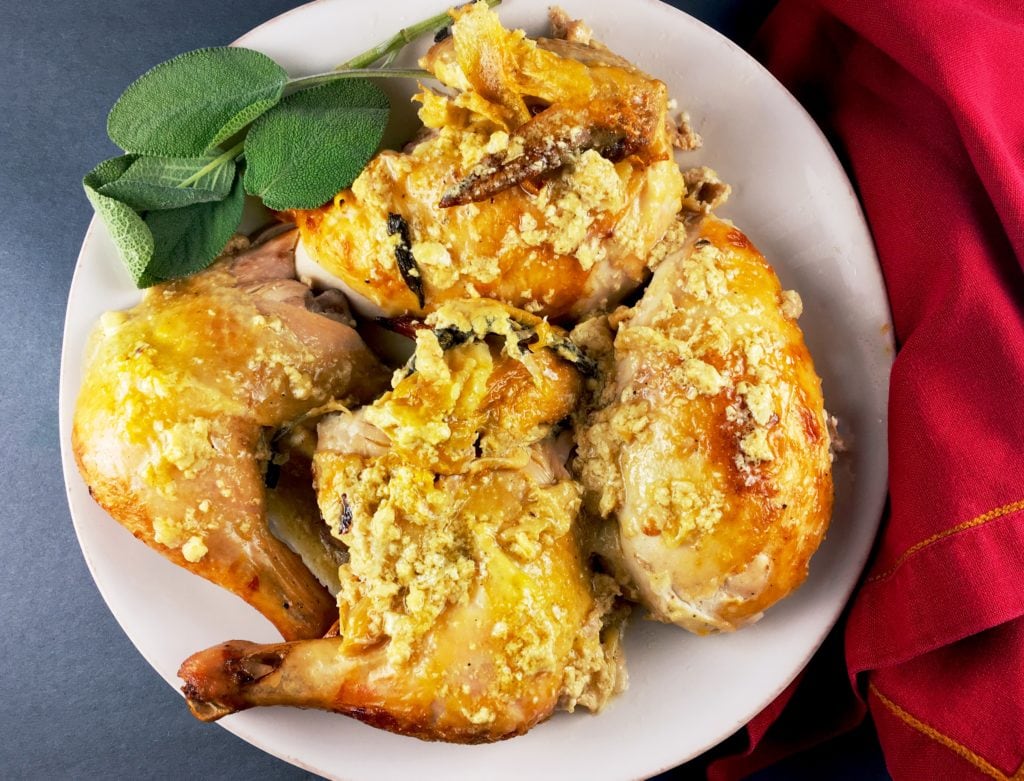 Like other Chicken Recipes I’ve posted, Roast Chicken In Milk is a pretty simple recipe with a few key ingredients – sage, lemon, a cinnamon stick, and of course, whole milk – don’t even try to use 1% or 2%, only whole milk will do – and a few minutes of prep lead to this juicy, flavorful roast chicken.  It’s so good you may just push the side dishes to the place they belong – the side – to make room for more of this heavenly stuff. It is kind of ugly, but really, you can get past that, can’t you? This recipe comes from Jamie Oliver, purveyor of all sorts of delicious recipes.   So, while you can find this recipe written in many spots, this video (in which Jamie is translated to German) is interesting to watch and you can see extra steps he takes to boost the flavor, steps which most written recipes exclude. I included these steps in my adapted recipe. 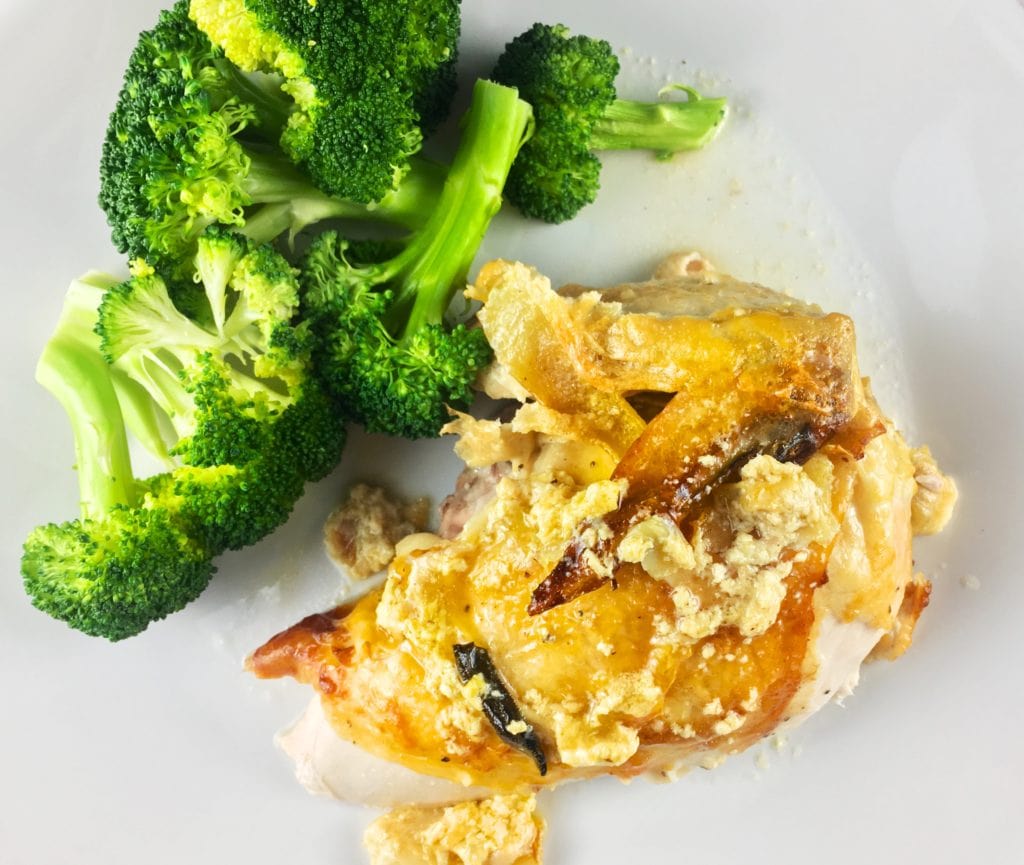 So as good as we all may be at picking someone’s name from a list, I’ll bet you’ll agree with me that Chicken in Milk should be renamed Best Roast Chicken EVER! Enjoy!

Roast Chicken in Milk is everything a chicken should be:  juicy, fragrant with lemon, sage and cinnamon, and so flavorful you will wish you’d made 2!

I pretty much stuck to Jamie’s recipe with the exception that my pot was bigger than one that would fit the chicken “snugly”, so I added a full quart of whole milk.  If your pot fits your chicken “snugly”, you might want to stick with just 2 1/2 cups, as in the original recipe. 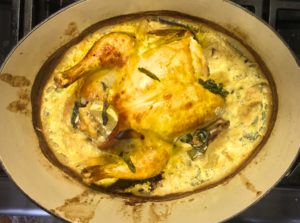 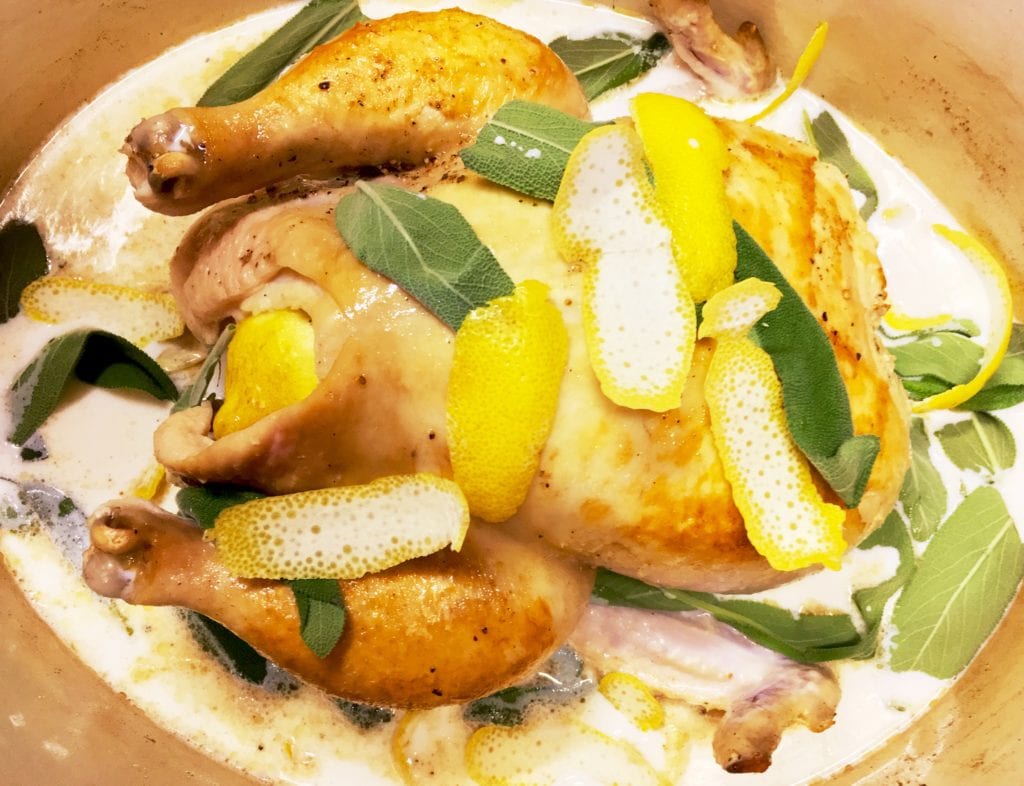