Home » Lamb » Braised Lamb Shanks with Ginger and 5-Spice
Thank you for Sharing!

Whenever I tell people that my friend and I cook together almost every Sunday, they inevitably ask, “What do you cook?”  Well, that’s a tough question, because the answer is “Everything and anything that sounds good on that day.”  Sometimes we are adventurous, starting on a Saturday for something that needs to be marinated or brined, but other days we do whatever is both fast and delicious.

Sometimes people will ask, “What’s the best thing you’ve ever cooked?”  Not that it’s an easier question, but this question starts a “Greatest Hits” video playing in my head:  the time we made Rogan Josh and my then 3-year old couldn’t stop shoveling it into her mouth, the time we made a roasted lamb leg and my son said, as he often did at 3, “Mmmm, that’s good chicken!”, or the time we made these lovely Ginger and 5-spiced lamb shanks for the second time, and took them to a friend’s house for dinner.  We served it to a “lamb hater”, and possibly converted her to our side, the side that believes lamb is one of the best main dishes ever and people who don’t like it just a haven’t had lamb as it should be.  This recipe is how it should be.

Place the entire package dried mushrooms In a bowl and pour the boiling water over them.  Let sit until you are ready to use them and the broth this process makes.

Into a food processor, place the ginger and garlic.  Finely chop. While processor is running, add cilantro, black bean sauce, 2 t. Oil, and 5-spice powder.  Process until the mixture forms a paste.

Cut several slits (about 3/4 inch deep and 2-3 inches long) in about 5 places in each shank.  Rub about 1T paste per shank into the slits, then rub remainder of paste over the surface of the shanks.  You can do this in the morning prior to cooking, just cover them and place them in the refrigerator until you are ready to finish the recipe. 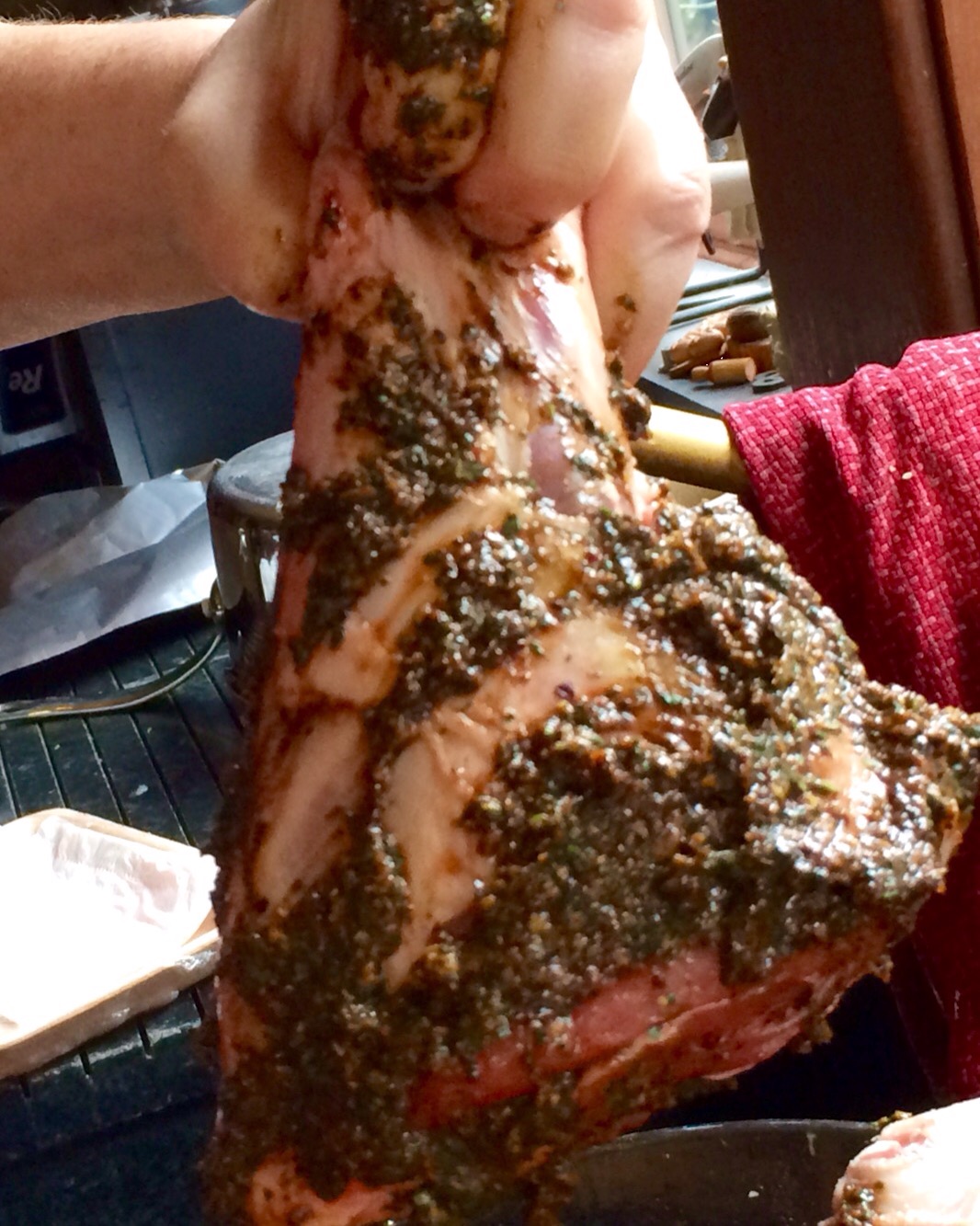 Cut 6 sheets of aluminum foil to about 18″. Remove the mushrooms from the broth, chop into 1/2″ pieces, and evenly divide among the 6 foils along with the green onions. 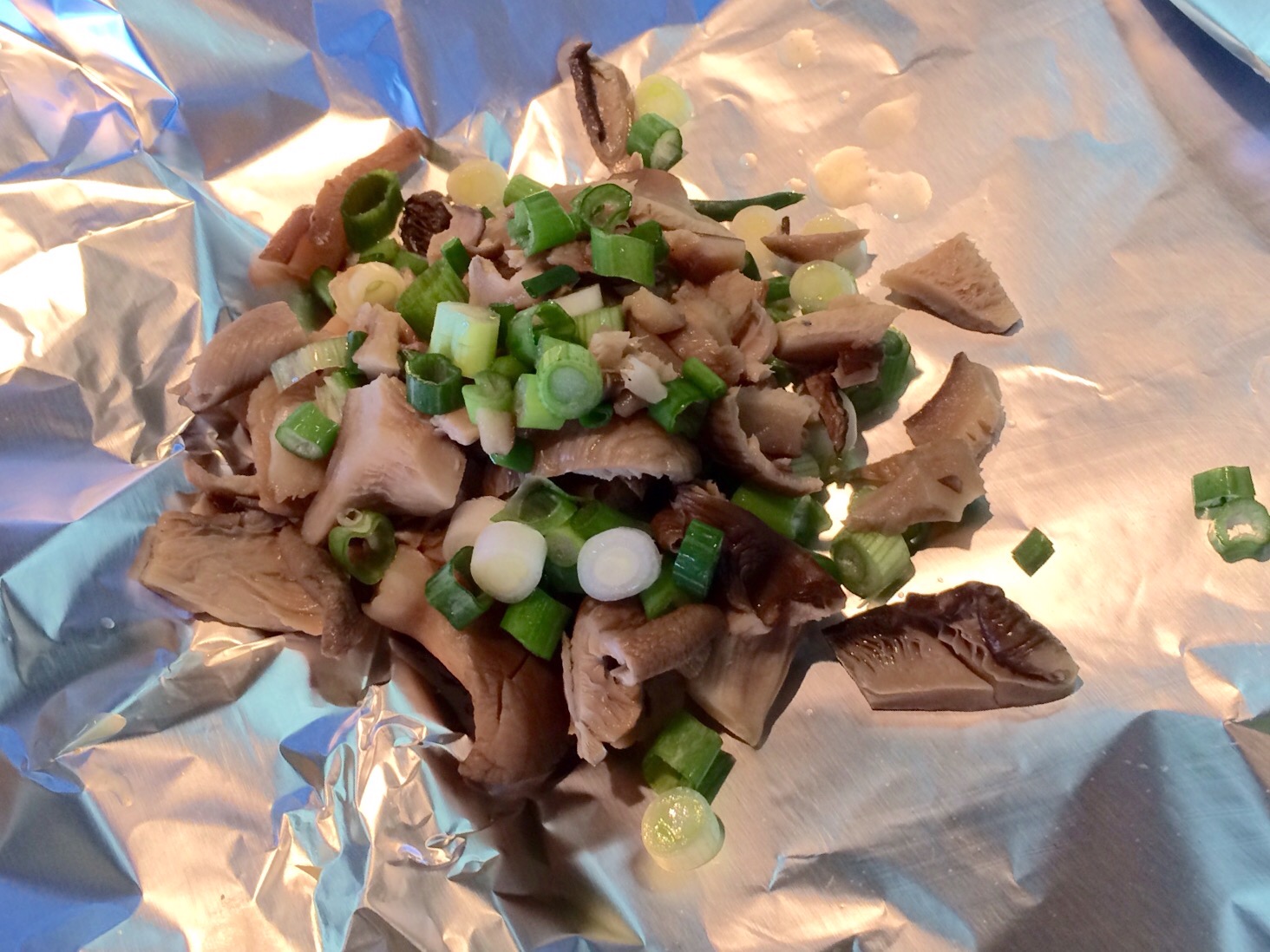 In a hot skillet with the remaining 4 t oil, sear all sides of the paste-coated shanks, until all sides are brown, then place each of the shanks atop the bed of onions and mushrooms on each foil.

Into the hot skillet, pour 1 1/2 c. Mushroom broth and the sherry.  Scrape up any browned bits, and reduce livid to around 3/4 c.  It should be slightly syrupy. Spoon 2T reduced liquid onto each shank.  Seal each shank tightly into its foil. Place them on a baking sheet.  Bake 2 hours.

At this point, the meat is so tender it practically jumps off the bone. You can serve each person their own shank, or scrape the meat off and serve over the rice.  We scraped it off, because we had more diners than shanks.

It was as delicious as I remember.  So fragrant, tender, superb. Still a greatest hit!