or, Blast From The Past

Many years ago, when I was in college, I worked at this fancy-pants restaurant where all the parents brought their kids after the Big 10 Football or Basketball games, and to celebrate Graduation.  It was also one of the most popular “date night” places in town. More important than that, it was the place I met my incredibly wonderful husband.  So I have many fond memories of the place and the many hours I spent there.

There were some great dishes on the menu.  Being located in the Midwest, the best dishes usually involved steak. Delicious, tender, savory, Midwest Meat! Always served with a baked potato (well, you could choose rice pilaf, but really? Next to a steak?) and a salad.  A great meal in any part of the country.

One of our favorite steak dishes there was the Filet Mignon Oscar Style.  If you haven’t had a steak Oscar Style, you really do need to try it!  If you aren’t a meat eater, it is also a great preparation for a fish fillet, maybe cod or tilapia. Even swordfish would be wonderful “Oscared”.

The Oscar preparation is traditionally to top the steak with asparagus, crabmeat or shrimp, and Bernaise sauce.  Bernaise is a variation of a hollandaise sauce, with Tarragon and/or Tarragon vinegar instead of lemon juice. Bernaise is often perceived as difficult to make, and it is tricky, when made in the traditional manner.  However, as with Hollandaise sauce, there are some great (easy!) blender versions out there. I couldn’t decide whether to make Hollandaise or Bernaise, so I kind of made a hybrid  “Tarragon Hollandaise”, with a little less lemon than traditional Hollandaise.

Anyways, for Father’s Day, DH wanted a steak Oscar, and who am I to disappoint? I set out to make the best Oscar ever. Instead of Filet Mignon, I chose New York Strip, for 2 reasons: 1) It has much more steak-y flavor than a filet, and 2) it was on sale at my local market.  It’s also my personal favorite cut of steak!

So the basics of this recipe are:

1) Grill the steak and asparagus

2) while the steak is “resting” (following its exhausting grilling), prepare the Bernaise, it only takes a couple minutes

Now, this assumes you have some pre-cooked crab.  I took the easy way out and purchased a jar of lump crabmeat.  You could also grill some shrimp along with the steak and asparagus, which would be quite delightful!

Anyway, the meal was a success! Much easier than the outstanding Oscar would lead you to believe. 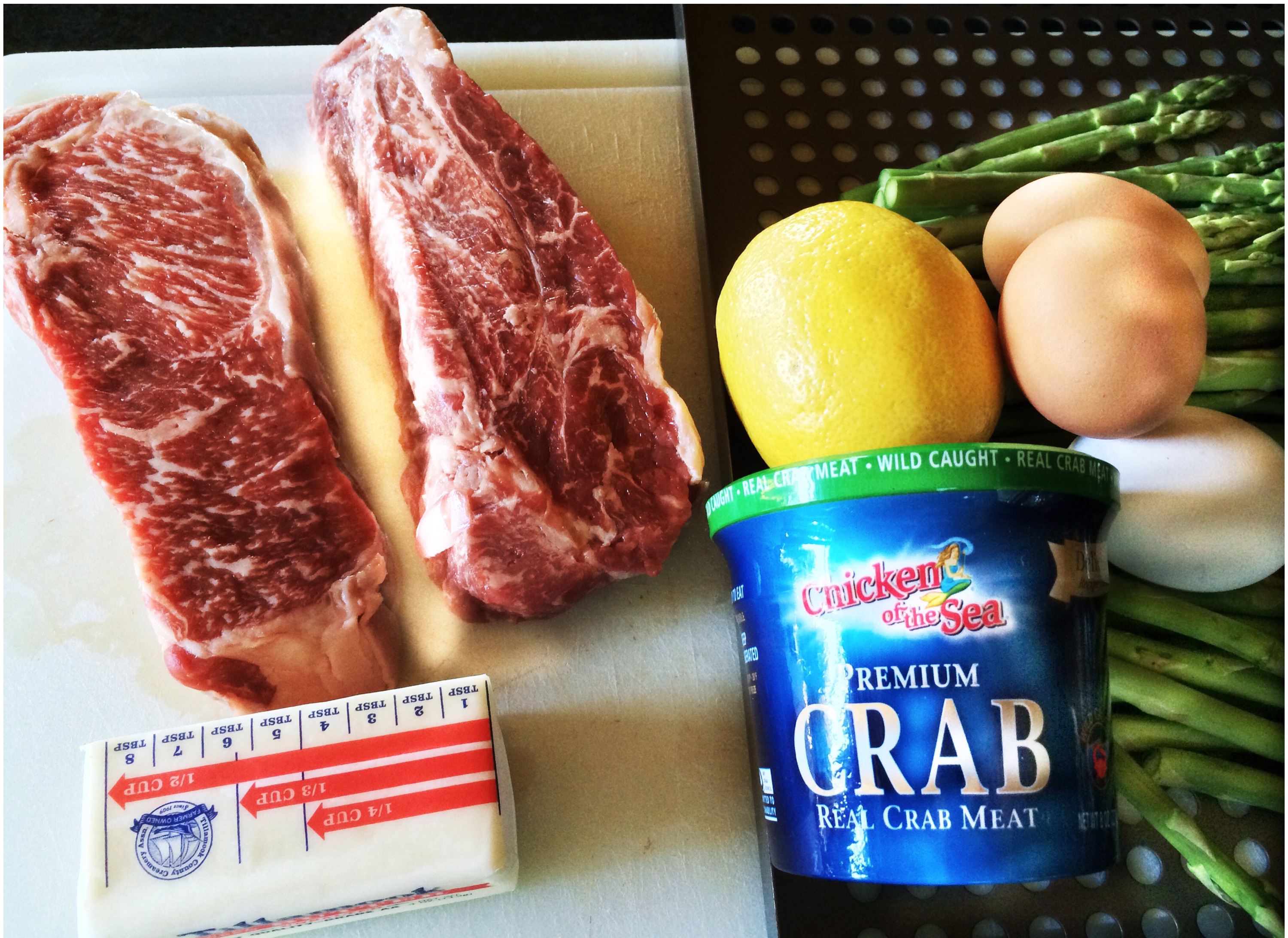 Preheat your grill to medium-high temperature. Generously salt and pepper steaks. Toss asparagus with about Tablespoon of olive oil, then sprinkle with salt and pepper.

Grill steaks until done the way you like. My steaks were just over an inch thick. I grilled them 6 minutes on one side and 4 1/2 minutes on the other side and they were perfectly medium-rare.  The asparagus will not take as long on the grill. Remove from grill when done. Cover steaks with foil. Let rest for 10 minutes, while you prepare the sauce.

In a blender, add the egg yolks with a sprinkle of salt and pepper. Turn the blender on to low. After a few seconds, slowly drizzle in the melted butter. As you add the butter, you will notice the sauce becoming thick. After the butter is all in, add the lemon juice and the tarragon. 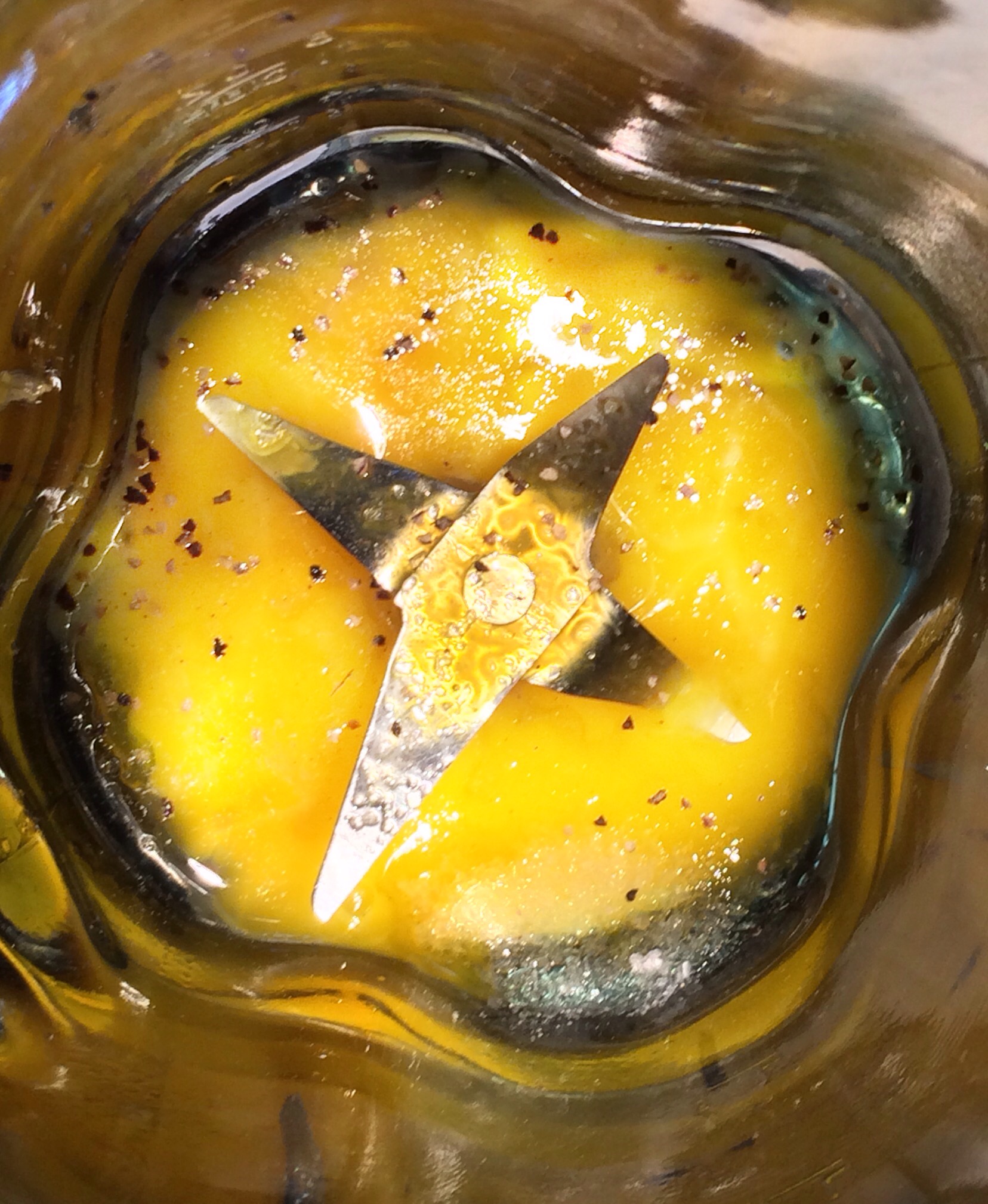 Next, assemble the dish.  Place asparagus atop the steaks. Place crab or grilled shrimp over the asparagus. Then top with the yummy Tarragon sauce. I added a bit of paprika on top for a pop of color. 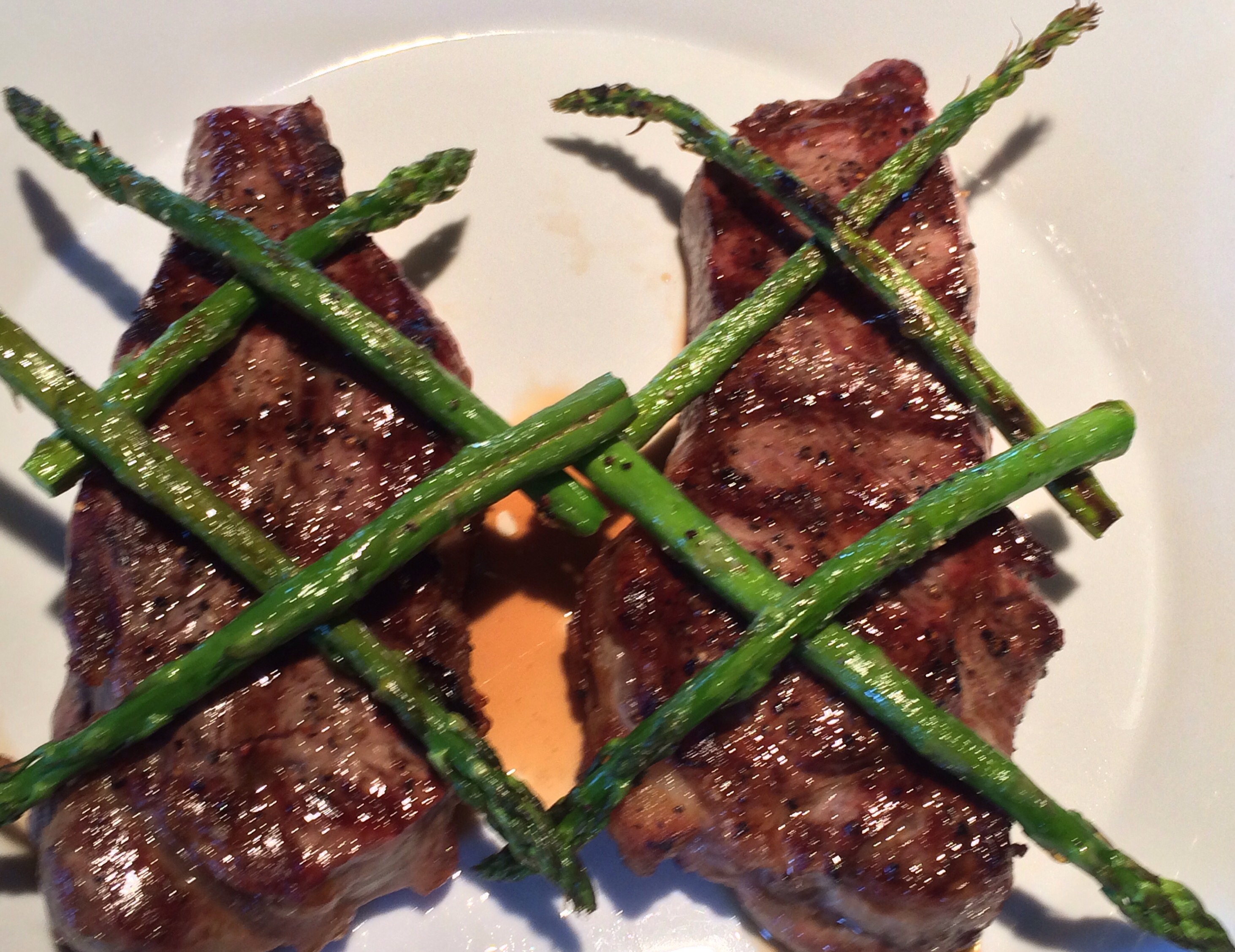 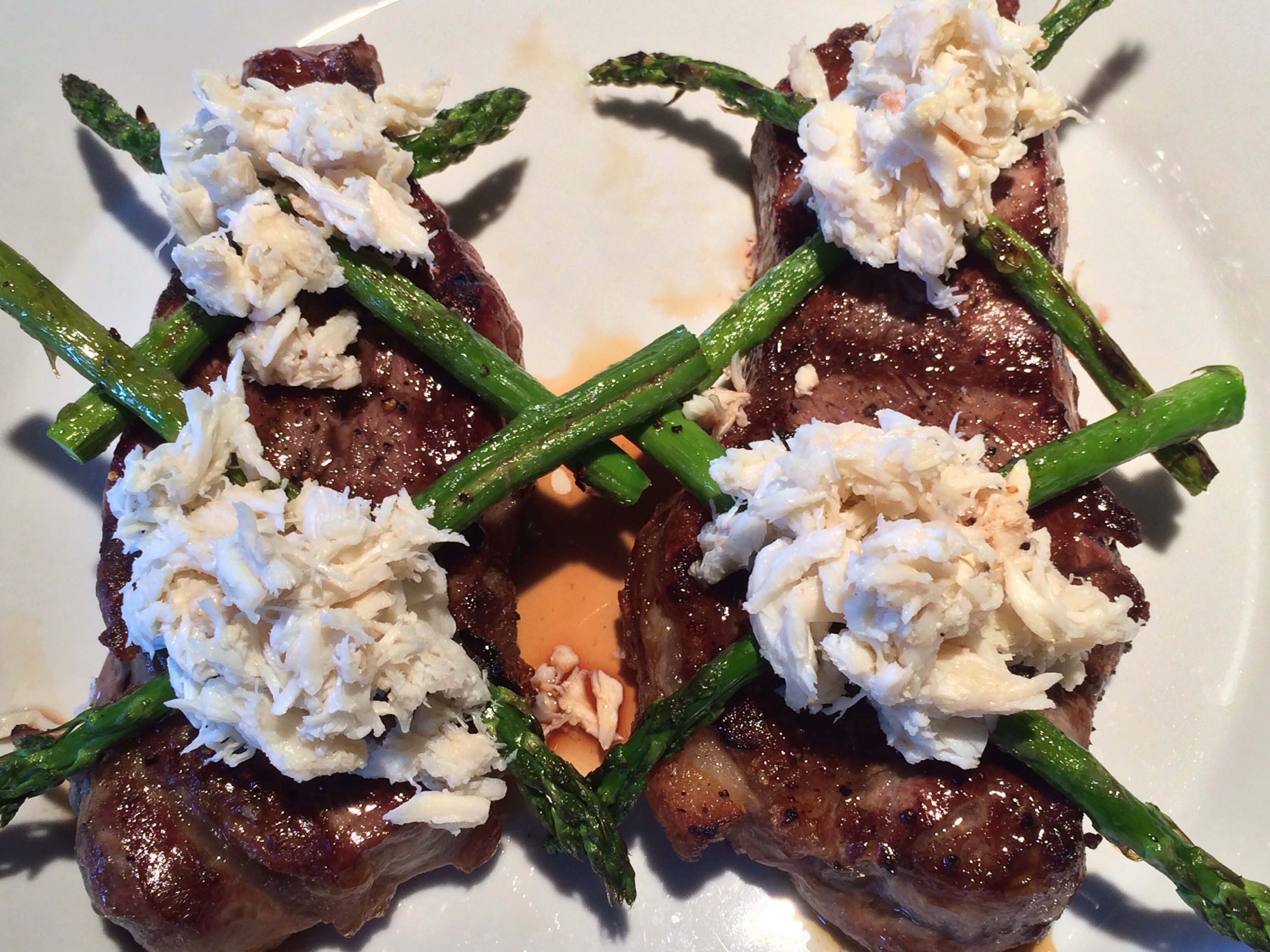 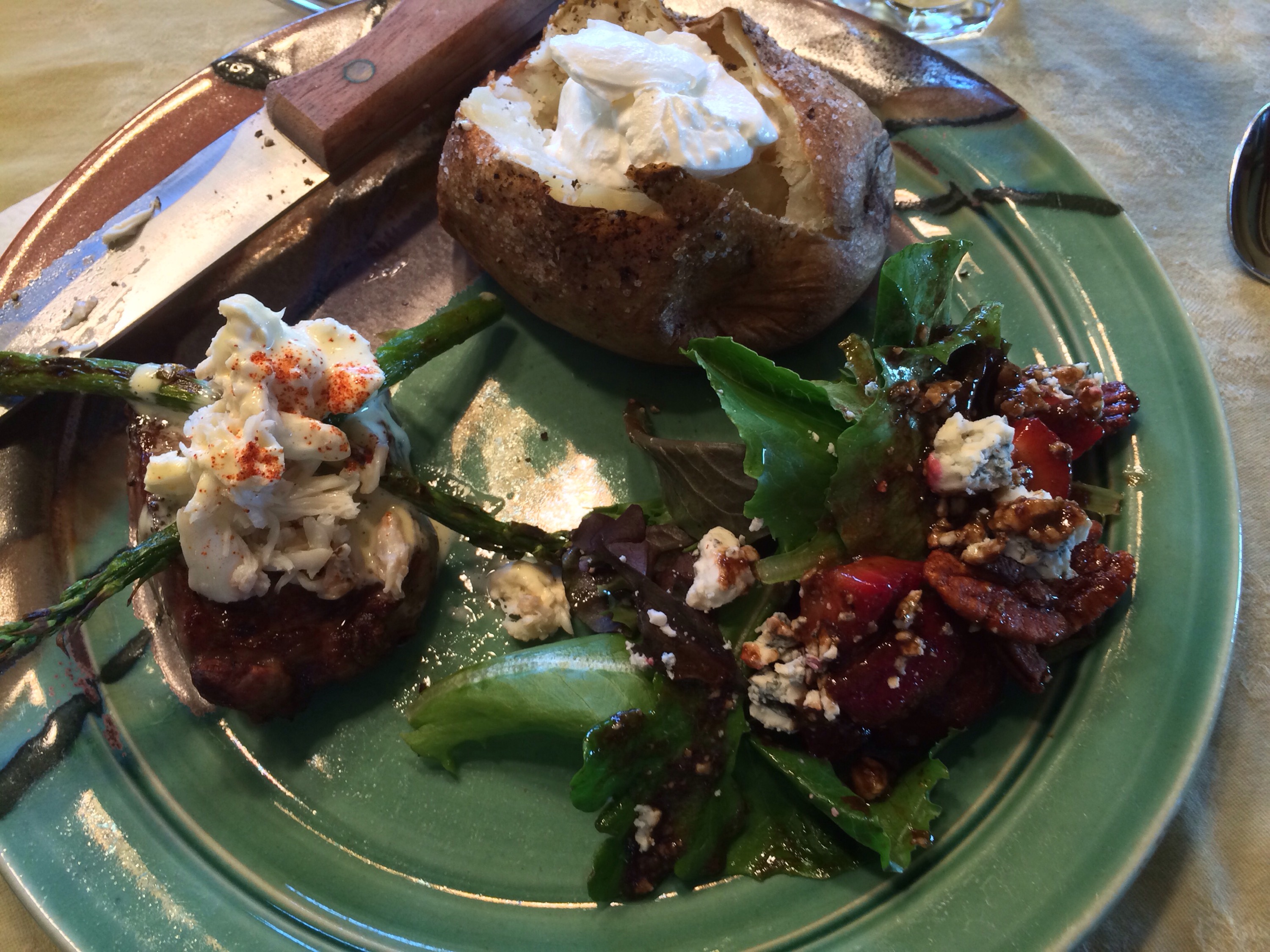